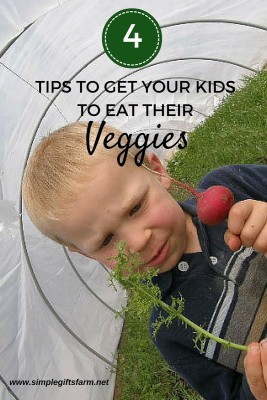 We all know that lots of fresh vegetables and fruits are healthy and we want to feed our children the best we can so they grow strong and healthy. Unfortunately many children seem to dislike most vegetables and we fight to try to make them eat them. I can certainly relate! My two boys have been completely opposite when it comes to their eating habits. My oldest son was so easy, he has been willing to try and liked almost everything from the time he first started eating solid food. It was so easy in fact that I used to think picky kids were that way because their parents didn’t really try to give them vegetables. Boy was I wrong! My second son is very, very picky. He literally only liked 3 foods at first: cheese, yogurt, and potatoes. His list of likes slowly expanded to include a few other things like pasta, bread, a little bit of meat. But he would not touch vegetables or even fruit! It seemed crazy to me- here we were growing and eating tons of healthy organic veggies and we had a child that simply hated them. I am happy to say that now at 3 years old he is starting to come around just a little bit. He actually likes most fruit and some vegetables like carrots and cucumbers, and will even willingly eat a little bit of kale and salad. Here are just a few little tips that have helped us as we have worked on getting him to eat his veggies(and fruit, too!)

1.) Eat and enjoy lots of vegetables yourself.

I have found that when we eat lots of vegetables in our meals it makes our picky child curious. He may not always want to try them but when we are enjoying our veggies he starts to wonder if maybe they are something good and sometimes he will want to have a little bit on his plate, too. For example he now likes to have one or two leaves of salad on his plate and may or may not take a bite. I also think that little children like to be like Daddy and Mommy(and big brother, too in our case) and so will begin to copy what we do.

2.) Serve them the same thing you are eating

I have never wanted to fall into the trap of making something special for my picky eater. For one thing I really wasn’t willing to go to that much trouble and for another I suspect that it would only reinforce his pickiness. I have always simply served the same meal to everyone in the family. I have always made sure that there was something that he did like to fill him up while giving him a few bits of what he doesn’t so that he does have the option of trying it. When I make stir-fry we have it over rice or noodles which he likes as well as meat. I make sure he has plenty of those things he likes as well as a few vegetables, maybe one of each kind. I will also usually make him try just one bite of something he doesn’t like; in the stir-fry I may choose a piece of carrot or broccoli. Sometimes this works wonders as he has decided he doesn’t like something that he has never seen before without even trying it then when he takes a bite he discovers that it is actually good and keeps asking for more. I always let him have the option of trying something new by having a few bites on his plate.

Along with this however I try not to make to big of a deal out of making him eat things he doesn’t like. To this end I make sure that he is mostly served food that he does like. I also don’t don’t make him eat every last bit on his plate. But like I mentioned above I do choose one thing to make him try. When I make eggs in the morning  I often saute kale in the pan first, so when I serve his breakfast I always make sure he has a few pieces of kale but mostly eggs. Amazingly he has been eating it kale and all the last few days.  To me it seems  pointless to give him a large helping of something I know he doesn’t like such as kale and then have a big battle over it.

By this I do not necessarily mean to hide or mask it too much like putting zucchini in muffins or bread although there is nothing wrong with that either. What  I mean though is to use different methods of preparing and seasoning to make the veggies more interesting. There are actually many ways to prepare most vegetables and if your child doesn’t like them one way he may prefer another and can begin to develop a taste for them from there. Kale chips is the first way that my selective eater enjoyed any vegetable. Another way I made kale that both my boys liked was to chop it finely add a little lime juice, chili powder, garlic and a pinch of sugar, then massage it with my hands until soft. We used it in our tacos and burritos along with beans, cheese and all the fixings. It is a lot of fun to experiment with new recipes and there are plenty of ideas online. So go ahead and get creative!

These are just a few simple ideas that have helped us as we have helped our own picky child expand his eating habits. I am no expert but maybe you, too may find some of these helpful. What about you have you had any picky eaters in your family? What tips and tricks have worked for you?