I always look forward to the first cucumbers of the season with great anticipation. Cucumbers are so fresh and crisp! The ones from the store are never quite as good as the ones out of the garden either. One of the first things I always make when the cucumbers are ripe is this cucumber tzaztiki sauce and homemade pita bread to make gyros. 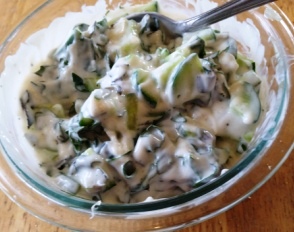 When I was in my teens I started a monthly ethnic cuisine family dinner night. My siblings and I were homeschooled so I thought it would be fun to study different countries and then cook and eat the food from each one. I chose the countries and researched recipes and each family member was supposed to have something about the current country to share at the dinner table. It was such a fun tradition while it lasted!

One of the countries we studied was Greece and it was then that I came across this recipe somewhere. When looking at tzaztiki recipes more recently I discovered there are several variations using different herbs such as dill instead of the mint. I also had a Greek cookbook from my Grandmother, who was originally from Greece , that had an amazing recipe for baklava in it.

I still love trying different kinds of ethnic cuisine any chance I get.